I'm going to give this one more shot. I really think I have what it takes to write a blog.  I'm not going to just take a bunch of boring food pictures this time. Last time, I was trying to log my food and dietary habits to hold myself accountable for my food choices, and blogging is a good way to do that. I still want to keep track, but I want to keep this interesting, so I'm gonna talk about a lot of other stuff this time.  (You know, like I promised the last time.)

I recently recommitted myself to a healthy lifestyle. Yeah, I've been vegan for nearly 21 years, but that doesn't mean that I always eat in a healthy way. In fact I recently posted about this on the discussion board at DrFuhrman.com. I'm a member there, and I've been doing a pretty good job of following Dr. Fuhrman's advice (ala Eat to Live).  I'm sure I'll talk about that here from time to time. Anyway here's what I wrote (in red):

My name is Gabriel, and I've been a member here since last October. I never got active on the board, though I have definitely been a lurker from time to time. I'm looking forward to being a little more involved in some of the discussions.

I'm 40 years old and have been a vegan* since I was 19. When I became vegan, I lost a good deal of weight after having gained a lot as an ovo-lacto vegetarian. In the days before there was much vegan junk food, I was a pretty thin dude. I ate mostly veggies, fruits, nuts, and salads with some occasional soy products and beans. I avoided white sugar/flour and didn't drink alcohol or caffeine (not even chocolate), and I didn't believe in supplements except for occasional B12. At the time, I was really into the Natural Hygiene way of thinking, even though my basis for veganism has always been ethical. I flirted a bit with rawfoodism, but I never really committed to eating completely raw.

This way of eating served me well for many years, though I probably should have been exercising more, as I was probably too thin. I'm sure that I could have made some other modifications as well (more beans and dark leafy greens and less or no fruit juices) and certainly some multivitamins. I didn't know very many vegans in those days, and I remember thinking that a vegan couldn't be fat. (HA!) I was even suspicious when a fat person claimed to be vegan.

In my mid- to late-20s, Karma paid me a visit. I started to gain a lot of weight. It was a stressful point in life. I was married during this time, and the marriage was a difficult one. My then-spouse was a talented vegan cook/baker, but her food was not the healthiest. Also, vegan convenience foods started becoming more widely available. I was eating more sweets and fried foods and other junk than ever before. I'd always been a big eater and stress just made me overeat. I gained a very significant amount of weight and developed some pretty bad back problems.

Fortunately, that chapter in my life ended. I filed for divorce and decided to get back on a healthier track. I began exercising and eating healthier again. I went to a doctor and had my nutrient levels tested. Everything was in the normal range, but my B12 was on the low side of normal. I don't think he tested my Omega-3 levels, so I don't know if I was deficient in those. I struggled a lot during that time. Losing fat was difficult as vegan junk food became more available and tempting, but I did eventually lose a good deal of weight. I also got more physically fit than I'd ever been before. I never did get quite to my goal though.

I went up and down quite a bit in my 30s. I had loosened up on some things (caffeine and alcohol), which opened up a new world of empty calories.

Stress would get me into bad eating habits and the availability of things like vegan chocolate doughnuts made things even tougher. In addition, my work life was very sedentary. Every time I gained weight, my back would start acting up. I'd eventually get fed up with clothes not fitting and not being able to sleep, and I'd find a way to lose weight combining healthy and unhealthy methods. I'd lose weight by the three e's (exercise, ephedra, and eating less calories), but it never really lasted.

Last year, things got bad again and I started to read Eat to Live. I'd owned it for a while, but I had not completely read it and assumed it was similar the low-fat PCRM Neal Barnard books, which had never really worked too well for me. Once I started to read it, it all made sense. I had heard of Dr. Fuhrman before through his connections to Natural Hygiene many years back, and I knew that he went to a lot of veg conventions; however, he explained things in a way that was new to me and made so much sense.

I started following his guidelines, and I immediately began to notice a difference. I lost weight slowly and felt really good! Planning meals became easier, and I quit trying to eat all day. Unfortunately I let myself get derailed, and I gained most of the weight back.

A few weeks ago, after a pretty bad food binge, my back was really hurting and I was having a tough time sleeping. I decided to fast (water only) for Memorial Day weekend. When I broke the fast, I recommitted myself to the Fuhrman way of eating. I have been very strict, avoiding junk food completely and have no desire for it at all. I am getting back in the gym slowly but surely. I will be stepping that up (pun intended) this weekend. The fat is coming off, and I've never felt more committed to get back in shape and healthy.

I am looking forward to learning and sharing here. We're lucky to have this tremendous resource!

*I'm a vegan in the ethical and complete sense of the word, meaning I don't use animal products in food, clothing, etc.
So, that's what's going on with me right now. By the way, the food binge that I mentioned was with the vegan donuts from Ronald's Donuts in Las Vegas. I brought back over a dozen. Yep, that's right. I carried over a dozen vegan doughnuts on an airplane. Here's a picture of some of those bad boys: 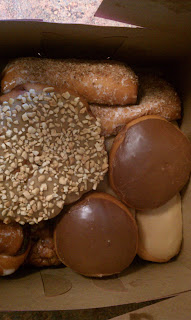 They look good, don't they? And, they were good... Until I started to feel like absolute crap. Jessica and I ate them in two days!

I've been a healthy vegan, a fat vegan, a thin vegan, and a relatively fit vegan. However, I've spent way too much time in the fat vegan zone, and I am ready to change that. This doesn't mean that I will never indulge myself. What it does mean is that from now on I'll be more conscious of the quality of my food intake. For now, that does mean strict adherence with no exceptions to my chosen regimen of unrefined high nutrient plant foods with several restrictions. It's too easy for me to lose my way when indulging in some sugary treat, and I'm serious about this. Health and longevity are both extremely important to me. Since this is such an important part of my life, I'll be sharing my progress with you.I'll still post some food pictures, but I'll try to make them worthwhile. I won't just post pictures of everything I eat. If I find that I need to do that, then I'll do that elsewhere.